On the way to the Golden Temple. 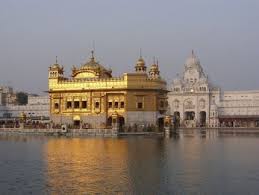 The only direct bus to Amritsar left at 3.30 in the morning. You would think at that unholy hour Indians might abandon their ‘scrummage queuing’ but no chance, ‘scrummage queuing’ in India never sleeps. (That was never bestowed by The Empire.) The chaos theory of Brownian motion that sublimates into physical pushing and shoving and baggage being tossed onto the roof encouraged The Boy to want to sit up there, like an extra from an E M Forster novel. Sitting atop of fast moving public transport is now banned, and The Boy had to sit on a dry seat in the innards.

Mrs Bhandhari’s Guest House, an old colonial building in the Army admin sector was a beautiful place to ferment, large verdant gardens and a swimming pool. The kids when they were not dipping in the pool wandered around the gardens like a couple of young Gerald Durrell’s pointing at lizards, allowing me to make up fictitious names for them, such as, the Lesser Spotted Bhandhari Ridge Back, quite common there.

Amritsar is a fascinating city. The obvious attraction is The Golden Temple, which is worth a deviation. It is part of our heritage, as I will come to later. Directly next to The Temple are the gardens where The Amritsar Massacre took place in 1909, when General Reginald Dyer opened fire on peaceful protestors killing between 379-1,000 people, and as many wounded. The bullet holes are still in the wall, picture framed in red wood. It is a scene I had watched with horror many years before in the film: Ghandi, and to see the bullet holes and the well where people tried to jump down to escape the onslaught is quite moving, for me anyway, not for the children. Who soon became bored with their history lesson and wanted something cold to consume.

The Golden Temple feels like it is part of my legacy as The Wife is from a Sikh lineage, and every house we visit on her side of the family has picture on prominent display. This is the children’s heritage, even though they are disconnected from it most of the time. It was one of the arguments we had used to swing the year off with their schools: a heritage holiday! A walk around the pool and a gaze in the Temple does bestow a meditative miasma. I was asked to carry the holy book (Guru Granth Sahib) at the end of the day, but that would have been too hypocritical.

That was not the main reason we were in Amritsar, we were there to pick up The Wife’s mother, who is called Nani-Gee by everyone that is younger than her. I called her by her first name once and she nearly burst with laughter, and the look my spouse gave me suggested I shouldn’t risk a second utterance, ‘you just don’t, that’s why.’ Nani speaks next to no English and my Punjabi is woeful, so there was no debate. I know enough Punjabi to know all the swear words in Punjabi (and Urdu) and when the North Indians are talking about the ‘White Man’ in a negative way.

In one school I worked in, a Pakistani pupil was bravely, and quite foolishly abusing a P.E. teacher in Urdu as I entered the changing rooms. “Ah Mr Pindar, you speak Urdu, what’s he saying to me.” “Well, he is suggesting you’re a penis, and that you have sex with your sister and mother.” The P.E. teacher did not find it as amusing as me, and after the translation, neither did the pupil. In the same school as term of both endearment and ridicule some pupils would call me, Mr Pindu. A Pindu is a simpleton or village idiot, I took it as a term of endearment.

By this stage we are three weeks into our jaunt, and it feels like we have been away months. The mother-in-law arriving and being surrounded by a lot of Sikhs feels like home to all of us. The warm glow of pride as Nani-Gee shows us around The Golden Temple explaining some of the rituals and having langar (free to all communal food, Langar literally translated means kitchen in Punjabi.) It is not only great for us the adults, but the kids as well; seeing their roots, even though they would never class themselves as half Indian, unless there was some gain from it.

There is also another feeling that hangs over me, and it is one of my Empire roots, that most of us have to shoulder if we are white/British, and honest, and it does not sit too well. I would have been better off not visiting the Memorial Gardens and seeing the negative legacy that a few thousand people ruling over millions upon millions of the indigenous populace. Of course you can argue there are some positives to The Empire, but once you move beyond sport, architecture, transport and organisation it is hard to find many. In fact it is best to adopt an ostrich position and bury your head in the sand, that way you might not hear the native people of North America, Australia and Africa wanting to have quick word! Maybe we should let it go, it was a few decades ago and we have The Commonwealth Games to make amends. The Gardens were not the only place I felt white-man guilt while I was away, but it was the first. Maybe I should get over it, the ones that profiteered the most seem to have, but it is not an option to bypass these reminders, it is a compulsion, and as a consequence our children are educated, not just into the selective, but the essential… and we move onwards, ever onwards.

Next week: Zipping up my boots, going back to my wife’s roots, yeah.

’50 Mistakes of the Fledgling Fiction Writer’ now appears weekly in the Huffington Post. This week’s is the very first one: http://www.huffingtonpost.co.uk/ian-m…

Ian M Pindar writes books, and also about himself in the third person sometimes, so it looks as though he has a huge team of dedicated professionals working around the clock. His latest book is in fact a novella and has the strange title of: ‘Foot-sex of the Mind’. It is not a Mills and Boon, but about finding out what is important in life far too late. It will take you four hours to read, or about the time it takes to get around The Memorial Gardens and The Golden Temple. 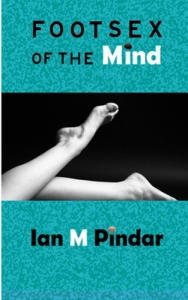